Youth Horizons has been blessed by two volunteer interns this summer. Casey Williams and Justin Conner have each been mentoring five children from the waiting list. They have also spent time around the office, helping wherever needed. Casey mentors each of her five protégés one-on-one, and she tries to get all five of them together for an activity each week. Both Justin and Casey said that simply getting to spend time with kids has been the best part of their summer here.

They are both in college. Justin is an electrical engineering major at Wichita State University, and Casey will be a senior at Kansas State University. She is majoring in Family Studies and Human Services, and thought working with “Youth Horizons over the

summer would be a good way to figure out what to do in the future. It seemed like a good way to get [her] feet wet and get a feel for what counseling might be like.”

Their internships will end when school starts, but they are both interested in mentoring again at some point in the future. Casey said that she’d like to get in touch with her protégés during the school year if she is ever in Wichita. 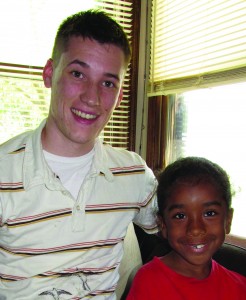 Justin hangs out with one of his five protégés. 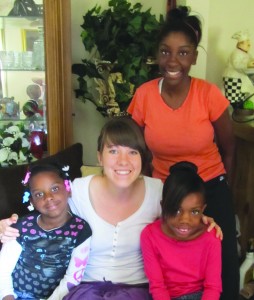 Casey spends time with three of her five protégés.