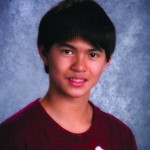 The end goal at the Kinloch-Price Boys Ranch (KPBR) is always that the child might one day enter back into his family with relationships restored. This means that boys need to learn the life and relational skills necessary to succeed in family life. Each boy will react differently to his time at the ranch—it often takes boys some time to adjust to the idea of returning to live with his family. However, as boys spend time in the structured environment of the Ranch, they find themselves more prepared to deal with the difficult situations that family life presents.

Over the last year, the KPBR has been home to 14 boys. One boy, Trong, took an unusual path home this fall. Though unconventional, it is clear that God’s hand was on the situation the entire time. His return home was unexpected, but he wrote in a recent letter to the staff at the KPBR, “I’m happy to announce that I’m back home. I even believe that God has brought me to the point that I am in life.” It is our dearest prayer that every boy who comes through the KPBR would come to know the Lord, so we are overjoyed that Trong recognizes God’s work in his life. He also wrote that he is currently getting all A’s in school and has made lots of new friends.

As you can imagine, his parents are thrilled. When Trong entered the KPBR, he was not at all interested in rejoining his family. He spent nine months at the KPBR. By the end of those nine months, he knew that the only thing he wanted was to be at home with his family. When he arrived home, his family was surprised. God prepared his family just at the right moment. His mother recently wrote a letter to Youth Horizons. In it she said, “One thing God did was to open my heart up to Trong and to really forgive him… my heart only felt love and connection with Trong. God not only healed Trong but also healed my hurts and heart completely once and for all.”

Trong’s parents closed their letter by letting us know that Trong is now doing well in school and that they have all grown closer to God and to each other through this experience. His mother writes, “God is faithful and does know the plans He has for us, plans to prosper us.” Even before we knew to pray for a healthy transition for Trong from the KPBR to his home, God was preparing the way.