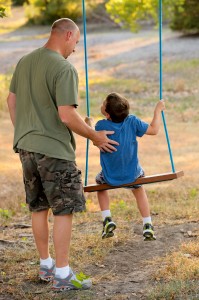 “I can plod. I can persevere in any definite pursuit. To this I owe everything.” – William Carey, missionary to India.

In the mentoring program, we have long seen the value in continuing in the same direction; faithfully plodding ahead in our pursuit of the work Jesus has called us to do.

Nate Davis is one person we’ve plodded alongside for a long time.

“My parents were divorced when I was four, and after that my little brother and I rarely saw our dad,” says Nate.

“In his early teens our father began to get in trouble with the law, and by the time I was born he had spent almost half of his life incarcerated. I soon began to go down the same path as my father. By the time I was 13 I was a three-time felon. One of the last chances I got was an opportunity to live at a Youth Horizons group home called the Martin House.”

It was at the Martin House where Nate’s path intersected with those of a few godly men who modeled what it was like to have a relationship with Jesus. One of those men was Nate’s mentor.

“While at the Martin House I was given a mentor, an awesome guy named Doug. Doug had no problem with jumping right into a relationship with me and we grew close very quickly. He was very supportive through some pretty tough times and I have always been very thankful to have him in my life,” says Nate.

Over the years, Nate and Doug have not been in contact as frequently as they were for that season. Nate says though, that he knows that Doug is still always there for him when he really needs him.

“ For the last two years I myself have now been mentoring a young man through Youth Horizons’ school-based mentoring program,” says Nate.

“I meet with Andrew once a week over his lunch hour and we do various things together. He loves to play football, and sometimes we just sit and talk through challenges he may be having,” he says.

“I enjoy our time together and there is no better feeling at this point in my life than being a ‘Doug’ to someone else,” Nate says.

Mentoring has truly come full circle in Nate’s life, and Nate’s story is just one that could be told from the mentoring program.

The school-based mentoring program grew over the past year in the number of participating students and matches. This fall was busy as old matches from the past school year were refreshed, and new matches were began as students and mentors transitioned into a new school year. We are excited as we see the vision of what the program could look like begin to coalesce into a clearer picture.

We keep walking forward with our community-based mentoring program. The horizon – or end goal – stretches out far ahead as these matches develop over a period of time. Currently, there are 132 matches in the program and 60 children are waiting for a mentor.

We’re excited about every one of the new matches that has been made this year and we’re grateful for the mentors that continue to walk alongside their protégés.