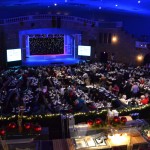 “I’m dreaming of a white Christmas…”

By the time the curtain had closed on a second sold-out house at the Crown Uptown Dinner Theatre, more than 800 people had attended the Youth Horizons Benefit Christmas Concert.

The concert was held December 3 and 4 at the Crown Uptown Dinner Theatre. This was the first year there have been two concert performance nights, as well as the first year for the event to be hosted by the theatre. The concert featured Earnest Alexander, who was joined on several numbers by the cast and orchestra of the theatre’s production of “White Christmas.” 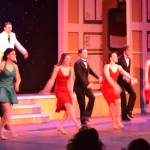 The cast performed using the costumes, dance choreography, and sets from the production. They joined Earnest on several numbers from the musical, including the film’s iconic “White Christmas.”

The concert was sponsored, in part, by 28 local businesses and individuals and we are thankful for their generous participation. Our thanks go out as well to the staff and cast at the Crown Uptown, including theatre producer Matthew Rumsey.

As of today, our net income is $37,941.56. Thank you for making this our best benefit concert yet. We are excited to see God’s provision as the new year begins.