We love hearing stories of how God is at work in the mentoring program, and the difference mentoring makes! Here are two stories that were shared with us recently. 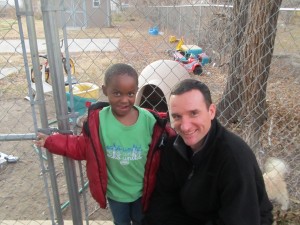 T’Avion is five years old. He and Jeff have been meeting since December 2012. T’Avion was talking with his mother one day about how he didn’t know his birth dad. He, like all children, was curious and wanted to know what his dad was like. He told her though, that it was ok that he didn’t know him. After all, he had a new “dad” now, Jeff.

T’Avion told his mother that he loves Jeff like a dad, even though he really isn’t. He was too scared to tell Jeff that though, or to tell him that he loves him. His mother told him that it would be fine for T’Avion to tell Jeff he loved him. T’Avion, a little too shy to believe her, responded that it didn’t really matter whether he ever called Jeff, “dad,” or told him that he loved him, because he was confident that Jeff cared about him and already cared for him. 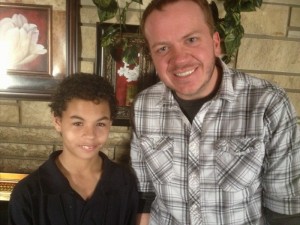 Tommy had been feeling the nudge of the Holy Spirit toward becoming involved in mentoring for some time. He was matched with Devin in March. Tommy wrote in a blog post for his church, “The first time I picked Devin up, it was a Sunday afternoon after church and I was so nervous. I couldn’t sleep the night before, and I was so worried that I wouldn’t make a difference in his life. Little did I know that mentoring would not only be a blessing for Devin’s life, but that this kind hearted 12-year-old would bless me beyond my wildest dreams.”

During their first outing together, over ice cream, Devin asked Tommy if he could visit Tommy’s church with him. Tommy was surprised, but said “yes,” and the two of them made plans for the next week.

The next Sunday there was unexpected snow. Tommy said he decided to drive by Devin’s house just in case he still wanted to go, but that he wasn’t expecting his protégé to still be planning on attending.

“Devin was sitting in the cold, on his front porch, dressed for church, with his Bible in his lap, waiting for me.”

“I shouldn’t have ever doubted his desire to come to church with me because of a little bit of snow,” said Tommy.

You can read the rest of Tommy’s story at Journey the Way’s blog.

These are just two stories of how God is working in big ways and small with our mentors and protégés!