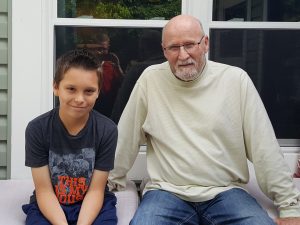 As a mentor coach, I have the privilege and honor to work with so many great men and women in our community. This month I would like to share about one of these fine mentors; Mike was a guy who had a heart and a desire to invest in the life of a young person — he just needed a little pursuing and patience on my end to get through all of the steps to becoming a mentor. Once matched, he was all in, and I never had to worry about a thing. Mike was dedicated to Damon, an all-around cool 9-year-old boy. From the beginning, Mike began putting Damon to work; from assembling a windmill to helping around the yard. Mike’s faith and commitment to God and his local church were solid. Mike began taking Damon to Northridge Friends, where Mike was a church member. Damon remembers not enjoying it much at first (and even falling asleep once during the service) but he soon became part of the church community.

About a year into Mike and Damon’s relationship, Mike was diagnosed with ALS (Lou Gehrig’s disease). This is when many mentors might decide to step out of mentoring — but not Mike. Even through his battle with ALS, he was dedicated to Damon. Much of their time together was spent playing chess. Mike was not one to let others win. There were many, many games in which Damon fought hard, but came short of winning. Mike would encourage Damon to “keep his head up, persevere, and don’t get discouraged.” These lessons have helped Damon well beyond the chess board. The day did come when Damon fought and won. This was a proud moment for Mike. I remember talking to Mike after that and him expressing his excitement that Damon beat him fair and square.

Family was very, very important to Mike. His wife, Bridget, played a major role as he mentored. Damon talked about how Mike was always there for Bridget. Damon said, “They were a perfect match. Mike would help around the house, showed respect to Bridget, and was the “power generator” of the family.” So many youth in our community don’t get to see a strong, healthy marriage and family. Damon became a part of Mike’s family.

On February 27, 2018, Mike went home to his Lord and Savior Jesus Christ. His fight with ALS was over. The two and a half years that he spent with Damon were years that were well invested. I often say, “we all need mentors, all of us do.” We can only hope to have someone like Mike to point us in a good direction. Damon was able to see a man of God who lived out his faith not only in his words, but more importantly, in his actions. Damon shared with me, “Mike was trustworthy and a really good person. A REALLY good person.”

Mike will be missed, but not forgotten. His work as a mentor helped to shape Damon and will continue to do so as Damon grows older. As I mentor, I will take the lessons that I have learned from Mike to help me along my own path.