Here is a thank you letter from a mom whose son is currently a part of our mentoring program:

“What does Youth Horizons mean to me? Truthfully Youth Horizons has helped in so many ways. There
was a time that I was worried that I was going to lose my son. I was worried that he was headed down a
horrible path and that in the end I would lose him. I tried to find different ways to try to make him see
that he needed to live right. Finally, I reached out to Youth Horizons, I wasn’t sure what to expect. It
seemed after I met with them that my son would wait a long time before there was really going to be 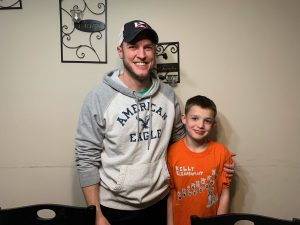 anyone there for him.

My son did wait what seemed to be forever before he got matched. I was nervous and scared in the beginning. Who was this person that I was allowing to spend time with my son? Was I really going to do this, was I really going to trust this person that I didn’t know? Yes, I was worried about everything and it help wipe away all of my fears and worries. Then I got to know the mentor. I truthfully couldn’t be happier with who he is and what he is about. He came into my son’s life and help more then he could know. When he started with my son he was lying, fighting, stealing, and other things. But his mentor helped with it all. Never one time did he over step but just helped reinforce what I was trying to do, but he was able to do it in a fun way, in a way that my son understood.

In the beginning his mentor was just that a mentor, but threw this past year my son and him were able to get a bond that is almost magical, like he is that big brother that my son never had. I understand that this
really is for the kids. That the kids are the ones that it impacts the most, but to see him come home with
a smile on his face every time that he come back is priceless. When I see how it has helped my son
become more responsible because someone that isn’t his parent is telling him that this isn’t the kind of
life you want and to watch him grow from that and to see that blossom is amazing. The pair up seemed
to take forever and seemed like it was never going to happen, but the pair up that was created from it is
something that is worth waiting for. Because to see my son blossom and to see him start to show more
respect and responsibility is something that I couldn’t have imagined would ever happen. I am grateful
every day to Youth Horizons, they gave my son, and my whole family kind of peace because of how my
son has changed, how he has grown. Thank you.”