by sgadmin
Events, In the News, Newsletter 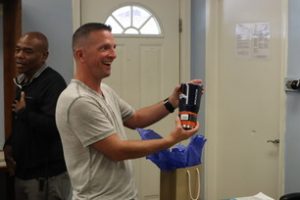 Congratulations to longtime Youth Horizons supporter Justin Moody, who is the new full-time Chaplain for the 184th Wing at McConnell Air Force Base. McConnell’s good news means Youth Horizons will lose Moody as its Executive Director of Residential Programming and Church Relations, a position he held from Aug. 2020, to Aug. 2021. He led operations at Kinloch Price Boys Ranch.

Youth Horizons President Robert Garner noted that he and Justin are close friends who also worked together for many years in the Wichita Public School District. “We are saddened by Justin’s departure, but also proud and excited for his new journey,” Garner said. “He’s one of my best friends. We are grateful for his lengthy service and dedication. We look forward to watching how God continues to use him in his future endeavors.”