Prior to 1989, the Youth Horizons office building on Douglas was known as The Dandelion. The Dandelion (officially Christian Community Services) was a Christian coffee house for young people, an outreach ministry to the homeless and a place for Christian concerts and movies. At that time Bob and Jacque Ward, Ken Canfield and Steve Weldon directed the organization. In 1986, Jeff Wenzel and Earnest Alexander became the new leaders of the organization.

In 1993, the non-profit status was officially updated and the organization’s name was changed to Youth Horizons. The ministry focus also changed from weekly Bible studies and discipleship for young adults to mentoring at-risk children in the community.

Throughout the years the work of Youth Horizons grew. Earnest and Jeff recognized that there was a need in Wichita for a boys group home. In April 1996, the original Martin House opened and full-time residential care was added to Youth Horizons’ programs.

In 2005, a relationship was developed with the Christian Association of Youth Mentoring (CAYM). Youth Horizons was one of the founding members of this national association that is dedicated to training and developing Christian mentoring programs across the United States and Breaking the Cycle of Fatherlessness.

A generous gift was given in 2006 to purchase property on the outskirts of Wichita and Youth Horizons began developing a new group home concept: the Kinloch Price Boys Ranch. The boys ranch was opened in 2007 and the Martin House was subsequently closed.

Youth Horizons has experienced tremendous growth in its relationship to the community, local churches, kids and families. God has certainly blessed our history and we eagerly look forward to the future. We are always looking for new mentors, house parents and volunteers. Join us in our fight to Break the Cycle of Fatherlessness.

Earnest Alexander is a co-founder and former president of Youth Horizons. He retired in 2019. Born in Selma, Alabama, Earnest came to Kansas to attend Butler County Community College and, later, Friends University. At Friends, he traveled with the Singing Quakers and toured much of the United States. He graduated with a Bachelor of Arts in Vocal Performance and traveled with the Continental Orchestra throughout the United States and the Caribbean.

Earnest grew up in the racially-charged South during the 50’s and 60’s, where he faced discrimination and segregation daily. He and his six siblings were raised by his mother – a single parent who worked hard to lovingly provide for her children. As a boy, Earnest was inspired by the great gospel singer,  Mahalia Jackson. He prayed and promised God that if he were given a voice like hers, he would use it for God’s glory. From the fifth grade through high school, Earnest studied voice and worked with the Hart College Music Conservatory at the University of Hartford. There, he studied under Virginia Shoore, Elizabeth Martin, and Marcilene Brown, women who not only influenced his life musically, but in all aspects of his life.

During high school, Earnest received many awards, including being named the representative from Connecticut for a national competition called “American Youth Performs.” As a result, he performed at Carnegie Hall. Earnest committed his life to Christ when he was 12 years old. He has lived a life committed to evangelism and the Lord has used Earnest to bring many people to know Him as Lord and Savior. As a response to a call on his life, he was ordained as a Baptist minister in 1975.

Earnest has devoted his life to reaching out to troubled and at-risk children. Through the years, Earnest has mentored many young people himself, serving as a father figure in many cases. He adopted two of them, Paul Alexander and Ty Singleterry, both now adults. Many of the kids with whom he has worked are now adults with families who are following Earnest’s example and are reaching out to mentor other young people.

Through his music and words, Earnest shares the love of Christ as well as his burden for young people. When performing, he challenges those in attendance to strive for a closer walk with Christ and to get involved in the lives of young people.

The first house at Kinloch Price Boys Ranch has been named in honor of Jeff Wenzel, who co-founded Youth Horizons with me in 1986. Jeff served as executive director of Youth Horizons until he passed from this earth on April 21, 2007. Jeff Wenzel is fondly remembered by staff for his passion for life and constant faithfulness.

I remember meeting Jeff Wenzel for the very first time. He was a student at WSU and on the yell team. He came running across the field at Cessna Stadium and greeted me as though we had been friends for a lifetime. The enthusiasm and genuine affection he showed that day never waned. Now, here we are many years later, and he’s living in the New City, just over in the Gloryland. On April 21, 2007, in the early evening, Jeffrey Guy Wenzel was called into eternity after heroically battling brain cancer for four years. However, we still feel his presence and we celebrate his life.

I will always remember how he lived—and it was wonderful. But I was more impressed with the way he died. Not for one moment did he hesitate in affirming his faith and his confidence in the goodness of God. We pay tribute to him because he lived a life of sacrifice and service, making everyone who knew him feel like they were his very best friend. And, in dying he showed us—in the midst of disappointment, pain and sometimes confusion—real faith still holds.

This ministry has never had a better friend or employee, and this man, Earnest Alexander, can’t ever imagine having a dearer friend. We bless his memory. 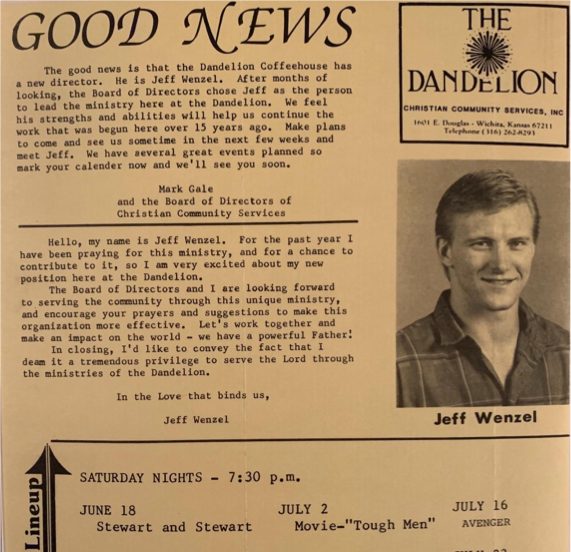 “Learning to live beyond one’s self is the greatest blessing of life.”

She was out front, brisk-paced, resolute and a little bit stubborn when she set her mind to a cause and the people whose lives that cause embraced. He walked a step behind, assessing the merit of her interests, asking tough questions, catching up to lock arms with her when he was satisfied something was worth the investment of their time and resources.

The Prices were blessed to have more. The Kinloch Price Boys Ranch is testimony to their desire to bring hope to the lives of individuals who have less.

The relationship started simply enough. In 1990, Harriett baked a plate of cookies for the staff and residents of The Martin House, Youth Horizons’ first residential home for boys. Over time, that bond grew to become a partnership that tremendously blessed the work and people of Youth Horizons.

In 2004, Dick and Harriett met with Earnest Alexander to discuss the possibility of a legacy gift. Earnest said his impossible dream was to obtain land on the edge of the city that would accommodate 30 to 40 boys in three or four homes. He dreamed of horses and cattle and small crops, the stuff of a tough work ethic.

And so the long search began.

Eventually Youth Horizons found 77 acres with large fields, streams for fishing and lots of room to run and play and work. With the hope of young boys becoming men of promise, the Prices purchased the land and donated it to Youth Horizons in 2005.

Today, the land is home to the Kinloch Price Boys Ranch. Were it not for the generosity, dedication and vision of Dick and Harriett Price, this land, this program and the lives we hope to change would be nothing more than a dream.